The landing page of Walking Cinema’s website displays a slick two-and-a-half-minute video which, without much informational text and no spoken words, introduces the viewer to the Boston-based organization’s specific brand of mobile documentary productions. The video’s framing moves in and out of reproduced mobile app interfaces and the real-world locations that the app-based storytelling projects correspond to using charming but perhaps overly-gimmicky 3d animation tools, all to a soundtrack of royalty-free deep house music. My curiosity is piqued, but this introduction inspires a degree of skepticism as I proceed to the website’s “Projects” tab, where the organization’s portfolio is on more detailed display.

Under the direction of Michael Epstein, Walking Cinema (formerly known as Untravel Media) has been at the forefront of “mobile documentary” since the development of its first projects between 2007 and 2009. Similar to other “multi-media storytelling” genres, platforms, or modes of production, mobile documentary is constantly evolving and difficult to define. The producers at Walking Cinema are invested in developing projects that push past the distracting, alienating qualities of mobile devices. Instead, they seek to create mobile-based experiences that are entertaining, but require users to be physically and mentally present in actual geographic locations. The language of “augmented reality” never comes to the surface in the Walking Cinema’s official descriptions, but is quick to emerge when producers of mobile documentary speak about their work.

In September 2015, Michael Epstein spoke about the evolution of Walking Cinema over the past six years through three major mobile documentary projects on a Mobile Documentary panel at the Brown University conference, “The New Tour: Innovations in Place-Based Storytelling.” Introducing this panel, Marc Ruppel of the National Endowment for the Humanities identified a tying theme of mobile documentary projects, which he dubbed “spatial contingency.” Whereas traditional documentary seeks to capture, interpret, or narrate reality into a consumable piece of media, mobile documentary turns out an audience to the places where its stories happened and may continue to happen and show the “pivot points” of an historical event or a social phenomenon. Since its earliest projects, Walking Cinema has been grappling with how it can most effectively put this idea of spatial contingency into practice, asking how these projects can reach the greatest number of people and hold their attention for the duration of a storytelling experience.

Moving to the “Projects” section of Walking Cinema’s website we see the organization’s portfolio laid out in reverse chronological order. It features the most recent project, “Museum of the Hidden City,” which is still in the development phase of its mobile-app component. Scrolling back in time, we arrive on the award-winning 2009 project “Murder on Beacon Hill.” As the first mobile app to win an award at a major film festival, this project was at the absolute forefront of the mobile documentary genre. It was inspired by a combination of a 1990 book and 2003 PBS documentary on a high profile, unsolved murder that occurred in 1854. Pieces of the PBS documentary are combined with newer video and audio and integrated into a map-based app that guides the user on a walking tour of Boston’s Beacon Hill neighborhood. A woman’s voice guides the user around a series of buildings into specific rooms and towards specific artifacts. With each location, the app reveals new layers of the murder mystery, focusing on the relationship between the murder victim and the major suspect in the case. Still available for download, although not optimized for newer versions of iOS software, the interface harkens back to an era of interface design when apps attempted to mimic physical textures to make the user experience legible through relation to actual sensory experiences of touch. Only about six years out, wax seals, aged-stationary and wood paneling, once mainstays of digital historical non-fiction interfaces, now read as corny and gimmicky. In his September talk, Epstein acknowledged the lessons of the app: there wasn’t a real opportunity for audience participation or interaction with the app, the documentary film portion, borrowed from PBS, didn’t really benefit from mobile integration, and the audience seemed to lose interest about a half hour into the one-hour experience. 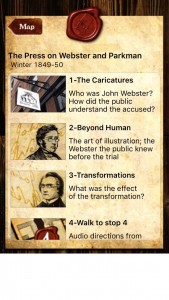 Walking Cinema’s second major project, “Posts from Gloucester” was completed in 2012 in collaboration with the Gloucester Harbor Walk project. The Harbor Walk is a public place-making development project aimed at revitalizing the Gloucester harbor and creating an interactive and walkable museum-style component to communicate its histories. Physical signage along the walk with QR codes link to geographically specific video content within a Walking Cinema app. 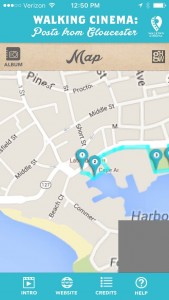 This mobile documentary project takes its cues from the lessons of Murder on Beacon Hill. It presents two 15-minute narratives rather than one hour-long experience. It also incorporates opportunities for interaction via in-app photography, which allows the user to take a break from the story and add their own “postcard” to a collection of user-generated content. 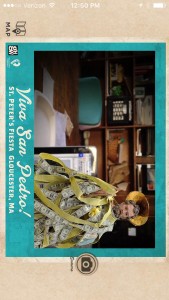 Permanent physical signage gives the app legitimacy as a storytelling tool, and incorporates it into the physical environment. The app interface itself has been more recently updated for newer iOS software, and is legible within more recent design trends in mobile interfaces, but is still a bit clunky and crashes periodically. The most glaring issue with Walking Cinema’s second major project is the limited appeal and significance of this app’s storytelling project. Its user base is limited to already-enthusiastic visitors of the Gloucester harbor walk. It is difficult to make a case for the project’s broader social or political significance, beyond the immediate geography and history of Gloucester itself.

Walking Cinema’s most recent major project, Museum of the Hidden City, offers an example of mobile documentary’s promise as a means of tackling social and political issues, and its ability to move beyond gimmicks and storytelling experiments. While Museum of the Hidden City is still in an ongoing stage of production and development, its six short documentary video pieces are available to view on Walking Cinema’s Vimeo account. The story follows Yesenia Ramirez and her family as they struggle with homelessness and attempt to secure a home in one of San Francisco’s affordable housing units, which must be constructed alongside market-rate luxury condos. The web videos are all based around interviews with Yesenia and her husband, and explore three major themes of the experience of homelessness, the difficult logistics of securing affordable housing, and the experience of living alongside young, wealthy, singles as a poor immigrant family. The project marks Walking Cinema’s first gestures towards issues of race, class, nationality and immigration status. The project’s different tone illustrates a shift away from northeastern folk history, mostly centered on deceased white male characters, towards living human subjects and the social issues they confront. However, this shift in subject matter means that some of the gimmicks and devices of Walking Cinema’s style of storytelling seem out of place in this new context. In his September talk, Epstein explained that, once developed, the mobile app will use a fictionalized high-tech observational telescope (or “superscope”) as its main narrative device, employing similar cheesy 3d animation from older projects to make transitions between scenes within the mobile app. Furthermore, Epstein introduces a fictional “Professor Pete,” who serves to guide the viewer through the story. These devices serve to cheapen the project’s overall effect, and it becomes difficult not to compare the effect to what might be achieved through traditional documentary. That the project relies on a fictional white male academic to serve as an expert voice speaks to the overall whiteness of Walking Cinema’s aesthetics, devices, project history, and presentation. Although the Museum of the Hidden City focuses on a family of Latino immigrants, the racial dynamics of their situation and of gentrification on the whole are never addressed head-on.

Looking at Walking Cinema’s portfolio as an evolving whole, the promise comes through loud and clear, but it becomes hard to ignore the shortcomings in the execution of these particular projects. These types of criticisms and issues are in keeping with Digital Public Humanities larger struggles with inclusion and promotion of diverse voices and efforts towards transformative critique. Walking Cinema’s earlier projects, whose appeal is somewhat limited to history buffs living in Northeastern cities, are reminiscent of projects like interactive digital archive, “What Jane Saw.” The execution is impressive and the interface is promising, but the question of the project’s greater significance or importance is left without a clear answer.

The turn towards more relevant social issues like homelessness, affordable housing, and gentrification is promising, but the film’s lens of critical analysis seems lacking. A first pass through Museum of the Hidden City begs the question: are we supposed to hold mobile documentary to a different critical standard than traditional documentary? Certainly, mobile documentary is uniquely situated to tell a certain type of story that is inherently linked to geography and physical space. The promises of mobile documentary are similar to the touted promise of VR storytelling as an empathy-building tool, but perhaps with less evil or ridiculous connotations. But if the genre is to truly progress beyond a gimmick or a one-off experiment, collaboration with experienced documentarians seems crucial. While Museum of the Hidden City’s app has yet to be released, I anticipate that it will be a promising but not wholly satisfying step towards a promising future of mobile documentary.