As of April 3rd, Veteranas and Rucas (VaR), an Instagram-based photographic digital archive of the Chicano underground scene from the ‘90s, had 59.9K followers and over a 1.730 publications. Each post gets over 700 likes and a lot of them go over 1000. Beyond those numbers, what makes the Instagram account really interesting and, let’s say, relevant, are the comments and people’s reactions. Followers are not just liking and commenting on the pictures but are establishing personal relationships with them by tagging their friends and asking them to share their own pictures to the account, by inviting relatives to follow the feed, by remembering those they had lost, and by wanting to recreate those old moments—among others.

The Chicano underground scene from the ‘90s in LA has been for years an underrepresented community in the pop culture depictions of urban Latino culture. It has been mainly represented by its gang affiliations and, because of that, linked to violence and transgression. But it is more than that as it includes other subcultures, such as the party crew scene that began during the late ‘80s and early ‘90s as an alternative to gangs. Party crews found unity within its members and, through the listening of house and techno music, were able to create a sense of belonging that last until today.

To understand Veteranas and Rucas’ success, it is necessary to analyze it through the lenses of the duality of representation and underrepresentation, where we have communities being constantly highlighted in, for example, official historical narratives, and so on, and communities that have no or a small recognition within those spaces. The Chicano underground from the ‘90s has been pretty much forgotten, and, when remembered, it has been done by labeling it with the gang stereotype. To that underrepresentation and stereotyping Guadalupe (the account’s creator and curator) has responded by creating her own bottom-up photographic digital archive and a space for collective memory.

In this sense, how can social media undertake the task of representing and connect underrepresented communities? How can it get over stereotypes that have been grounded in the collective unconscious for decades? What kind of possibilities is social media putting on the table to make that happen? How can a photographic digital archive of an underrepresented community be inclusive in what is being represented?

Social media allows you to go beyond your intimate circle and connect with people you have just met once, with people that you used to know but not anymore, and with people that you actually haven’t met yet. As the VaR case shows, you don’t have to actually interact if you don’t want to do it but, if you do, there are different levels of interaction that are being offered: you can like, you can repost, you can comment, you can tag others, you can comment by adding a hashtag. You can also go further and send a picture to be added to the feed and get to be the photographer, the model, the friend, etc.

This crowd-sourced aspect is definitely an important part of the feed’s success as it connects people not just to “the good old days” and the memories they carried but it also connects them to old friends, to family members and to acquaintances.

As for representation, and beyond its crowd-sourced feature, it is important to notice VaR’s role of representing the underrepresented and overcoming rooted stereotypes. But it is also interesting to analyze where it stands in terms of its authority and authenticity. The Instagram feed is owned by Guadalupe Rosales, an artist who as a teenager was part of the East LA scene during the ’90. That gives her an insider perspective, which coexists with her role as a curator of the social media photographic digital archive: she is in between being a team member and being the team leader. Because of her profession, the account also stands in the middle of a digital archive and an art project.

It is also worth pointing out that beyond the profile’s feed the account doesn’t reflect Guadalupe’s curation. On the profile it says: 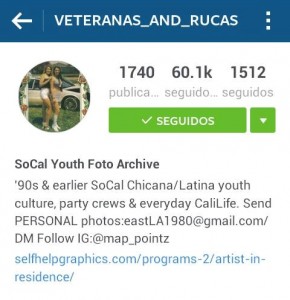 It seems reasonable to assume that, as you have to send the pictures to an email to participate in the archive, the pictures are going to go through a selection process before getting posted on the feed, which means that they are going to be curated. Even if there exist clear and consistent decisions about what to include and what not, as well as where and when to post what, that authority is obviated by not communicating it transparently. There is no tangible presence of authority just as happens in the art museum world.

That brings us to VaR’s common posts structure, which in some ways reminds us of art museums’ labels. In both of them, the following aspects of the picture/artwork get highlighted over many others: names, place, year, and the artist/photographer. 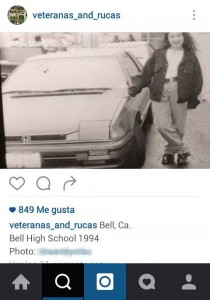 If you were to ask me “What are the things that the feed is relying on to be as successful as it is?” I would say:

The use of hashtags is one way in which Guadalupe Rosales appeals to people’s nostalgia for the “good old days.” According to the Merriam-Webster dictionary, nostalgia is:

1: the state of being homesick

2: a wistful or excessively romantic yearning for return to or some past period or irrecoverable condition.

In VaR’a case, Guadalupe is appealing to whole community homesickness and excessively romantic yearning for the past. By doing so, she is reconnecting all these people through their nostalgia for something that they all lived but that is now gone. In that way, she is building this community of underrepresented and largely stereotyped East LA Chicanos of the ‘90s by highlighting different aspects of what it meant to be part of that group of people. In doing so, she uses hashtags such as #90spartycrews where she puts together a bunch of pictures of people partying and makes a little video with a song on its background, drawing upon images and music to bring those memories back. She also uses #ThrowbackThursday (#TBT), #flashbackfriday (#FBF) and #waybackwednesday (#WBW)—, social media trends where people post pictures from the old days as a way to reminisce about the past. 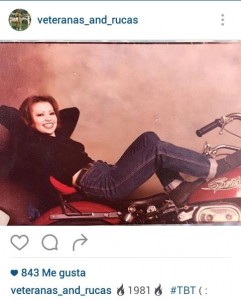 VaR also relies on the well-known “I know her” expression, which appeals to personal connections and relationships. By tagging on the pictures’ descriptions the persons that are part of the photo or who sent it, she is not just crediting the models, the photographer, or the contributor, but she is also doing a kind of networking. She is relying on the power of people’s connections to get out the word about her account.

On the other side, people are sort of validating their membership to the community by establishing and making visible their personal connections or relationship to who is being portrayed in the pictures or tagged in the picture’s descriptions. They are also doing so by showing their relationship to other community members by tagging them on their comments and saying things like “Het @whoever, we should definitely send our pictures of back in the day,” or “@whoever, I think that’s your cousin in the picture.” See for example: 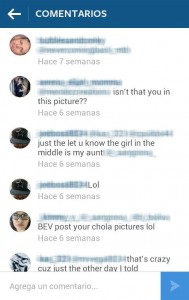 Underrepresented communities are also being represented on social media in other ways. Take for example the Humans of New York Facebook account and its daily display of pictures and quotes of, sometimes, underrepresented communities such as refugees and incarcerated people. In HONY’s case, the curation and authority is heavier and more explicit than in VaR, and the position of its creator is one of an outsider and not an insider, as Guadalupe. HONY’s audiences are outsiders that read about underrepresented people that he highlights each day. The Facebook account tries to break stereotypes by sharing pictures and stories of underrepresented people/communities. By doing so, Brandon Stanton (HONY’s creator/curator) is generating on its audience an emotional response that fosters the creation of a community of care.

In VaR’s case, its audiences are insiders, or at least that’s what the feed’s comments show. Through her Instagram account, Guadalupe is creating a gathering space more than a space for representing the underrepresented or for breaking stereotypes, which is also part of her goal as some of the interviews that she has given to The California Report and at the KCET show. Attracting mainly people who were part of the Chicano youth culture of the ‘90s helps achieve her first goal of reconnecting those people, but it doesn’t help a lot on her desire to overcome stereotypes as she is not reaching yet to outsiders or to those who believe/ed those stereotypes in the first place.

What could those two different approaches mean in terms of representing the underrepresented and overcoming stereotypes? Is the account success in some way linked to the different characteristics of their creators and/or to the singular approaches that each one has? What are people’s reactions to the quote-style pictures’ description that HONY has versus the label-style description of VaR? Is the quote-style propitiating a deeper connection with the person/people being portrayed or does the tagging that Guadalupe uses have the same effect? How could each of the examples mentioned here inform the other one?

I actually don’t think that my questions are being fair. It doesn’t seems fair to compare those social media accounts and/or their creators. Their missions and backgrounds are different and, despite their reach is completely disproportionate, both are being really successful on their goals.

Guadalupe has the chance to close the gap that the insiders/outsider dichotomy seems to imply through a collaborative exhibit with UCLA’s Chicano Studies Research Center that will include photos, video footage, music, and other memorabilia. A project like that one wants to reach not just the party crew members of the ’90s—insiders—but also to outsiders as a way to not just tell their story but also to break stereotypes of violence and transgression.