This past summer, I drove around the country for six weeks, attempting to meet and hang out with as many women and girls who skate as I possibly could, with the intention of conducting interviews and eventually producing a film with the resulting material. Instagram became a crucial means of connecting, communicating, and building a reputation as a legitimate and well-meaning outsider to the community I was aiming to connect with and document. In the process, I discovered the active and growing social media communities built up around women and girls’ skateboarding, a community whose online dimension illustrates a hopeful side of social media’s potential both for building supportive and connected communities, and for gaining knowledge and insight about how those communities function.

The internet and social media have had drastically transformative effects on pop culture and subcultures, and skateboarding is no exception. An older generation of skateboarders nostalgic for “the good old days” of 90s and early 2000s street skating lament the content saturation in the skateboard media landscape, first created through youtube and other video streaming sites, and more recently pushed to absurd heights by instagram’s integration of video into its social media platform.

The well-worn critique of web-based video’s effects on skateboarding culture have to do with the instant gratification of new skateboard content being produced on a daily basis. Before web streaming, when skateboard companies only released videos every year or every other year, the sport’s progression wasn’t so readily visible on a daily basis. Each new release blew the minds of suburban thirteen year-olds across the country, and introduced entirely new ideas and stylistic approaches to the sport.

Now, progression is seen in real-time, every day, and even every minute of every day as 15-second instagram videos of skateboarding are posted in the hundreds and thousands. At the same time, the speed and limits of this progression are pushed and tested. Maneuvers become absurdly difficult and dangerous. Most kids can never dream of imitating the sport’s most talented men. This creates a bifurcated skateboard community. Some pockets adopt a competitive attitude; they are jockified. They want to perform like the best of the best. Other pockets regress to stylistic approaches and attitudes from skateboarding’s history, adopting a cooler-than-you-jocks mentality. Both camps feel exclusive and alienating in their own way.

So pumped on the longer insta videos!! Banger at the end?

Enter an entirely different community with skateboarding’s now-global culture: the women and girls. Five years ago, a cursory internet check up on the world of skateboarding would have given the impression that the only people who skate were cisgender men. While this impression was far from the truth, skateboarding has had drastically disproportionate gender representation since the early 1980s, when the then-very-young sport experienced its first massive drop in participation, from which its punk rock, counterculture associations were born. Since that time, there have only been a handful of visible women professionals, and even these women have historically been poorly supported by the companies who sponsor them, and have had to hustle to make viable careers out of the sport.

The past 5-10 years tell a very different story. In the wake of the 2008 financial crisis, the skate industry cut significat women’s programs and contests, prompting a wave of DIY, ground-level projects to support and built participation among women and girls, as well as a handful of companies and contests founded and operated by women in order to provide the infrastructure for women to build careers within the world of professional skateboarding. The time frame of these projects also coincides with mainstream skateboarding’s “peak-youtube” period, as well as the rising importance of instagram within the sports online communities.

As these projects have come to fruition, visibility of women and girls within skateboarding is at an alltime high, both at the professional and ground level. Social media has come to play a valuable, central role in this growing and connected community.

On the first day of interviews for my project, I asked a handful of girls at an organized session at Owl’s Head skatepark in Brooklyn where they look to see other women and girls skateboarding. None of them hesitated to say instagram. The next day, I went to a all-girls backyard ramp session, also in Brooklyn, organized by the “femmeskate” crew. Raquel, the crews founder, grew her network of girls in new york largely through instagram connections, meeting girls at skate events in real life and then following up on social media. She publicizes her sessions on instagram, and reaches out to girls on the platform’s direct message function to turn people out to events or sessions.

After the first couple days of interviews, it became clear that it would be incredibly useful to create an instagram account associated with my project. I created the instagram handle @girlswhoskateproject and began posting pictures and video clips after stops along the way, using the communities most established “insider” hashtags: #ladiesofshred and #skatefeminino. As I continued to interview women and girls’ with significant connections in the women’s skating community, they plugged my account on their pages, and it didn’t take long to gain a small following on the account.

The utility of instagram in my own “research” speaks to the strength of the social media dimension of the women’s skate community as a whole. Instagram’s utility manifested in a couple different ways. First, I was able to direct message people who I was interested in interviewing in order to make a connection. The most exciting example would be my connection with Beatrice Domond (@beatricedomond), who I heard about through word of mouth. She lives in South Florida with her mom, attends university, and skateboards by herself in the early mornings. She has been gaining a cult following on instagram sincer her appearance in ultra-hip skateshop/fashion house Supreme’s 2014 video “Cherry.” Through instagram, we were able to set up a date and time to meet at her local skatepark. It was the first time anyone had travelled to interview her in person.

Instagram also served as a useful way of demonstrating the legitimacy of my project. When I got to the pacific northwest, and Seattle in particular, my interview subjects were skeptical of my intentions with the project, but when they saw the scope of the women I had interviewed, they bought in/got on board with what I was trying to do.

In contrast with other pockets of social media, and in particular with mainstream skateboarding’s social media world, the girls’ skate community feels particularly positive, supportive, and empowering. In the same ways that many men feel instagram is denigrating or perverting the spirit of skateboarding, the communities built around #ladiesofshred can only be said to cultivate and support IRL skate communities and culture. A look through the communities central hashtags and focal accounts illustrates a prolific, interconnected, co-supportive community. See here how members promote events on social media as means of building IRL connections and community: 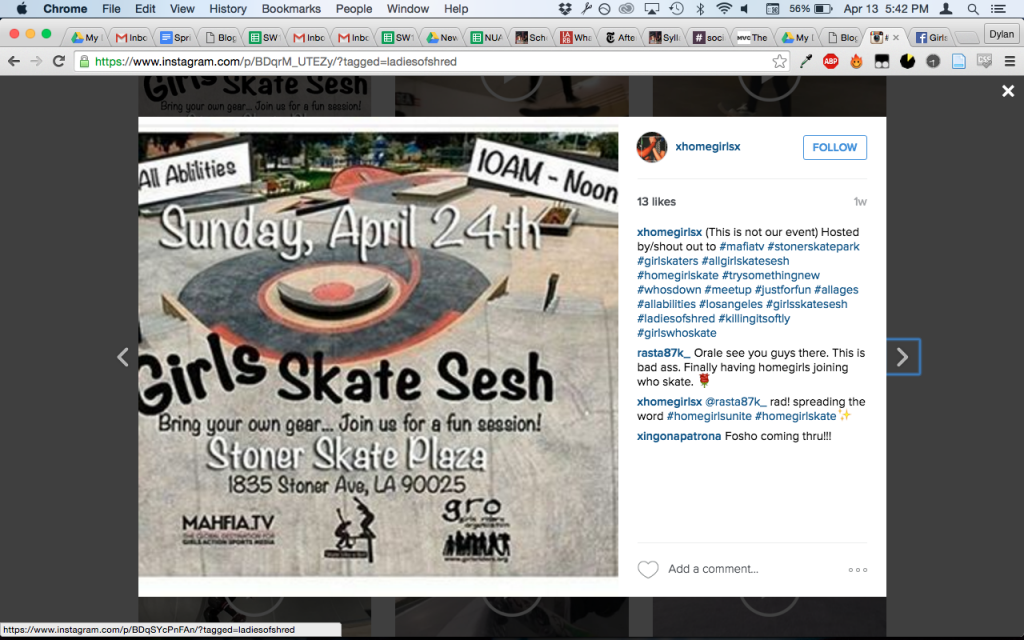 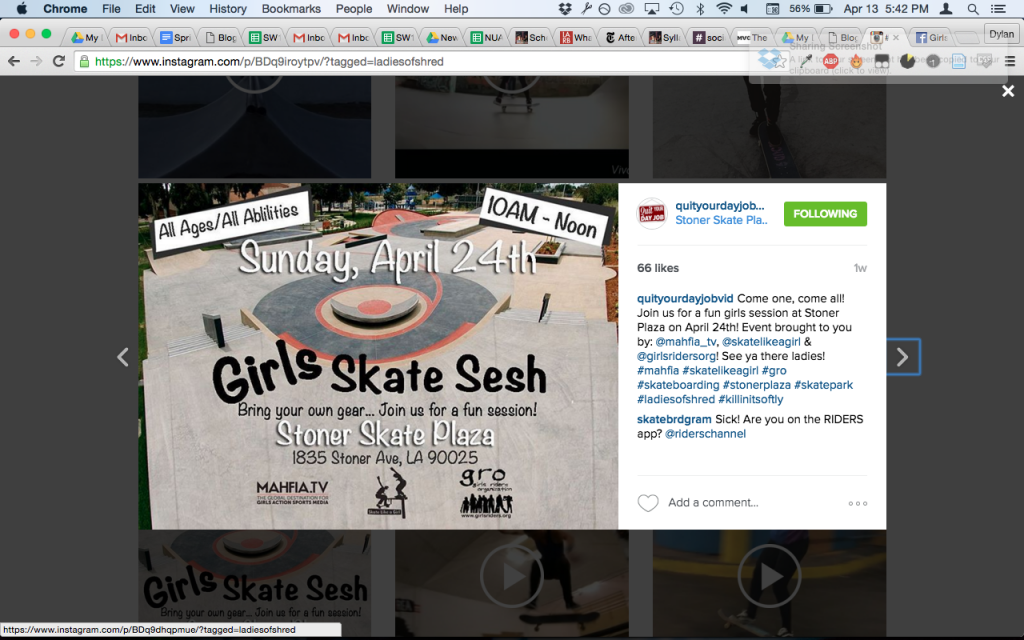 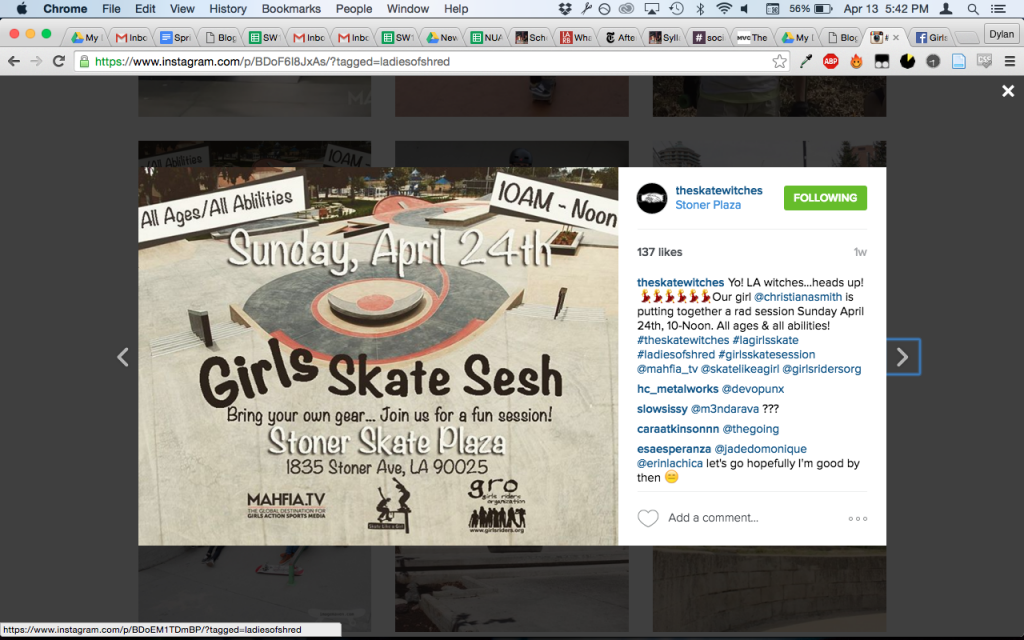 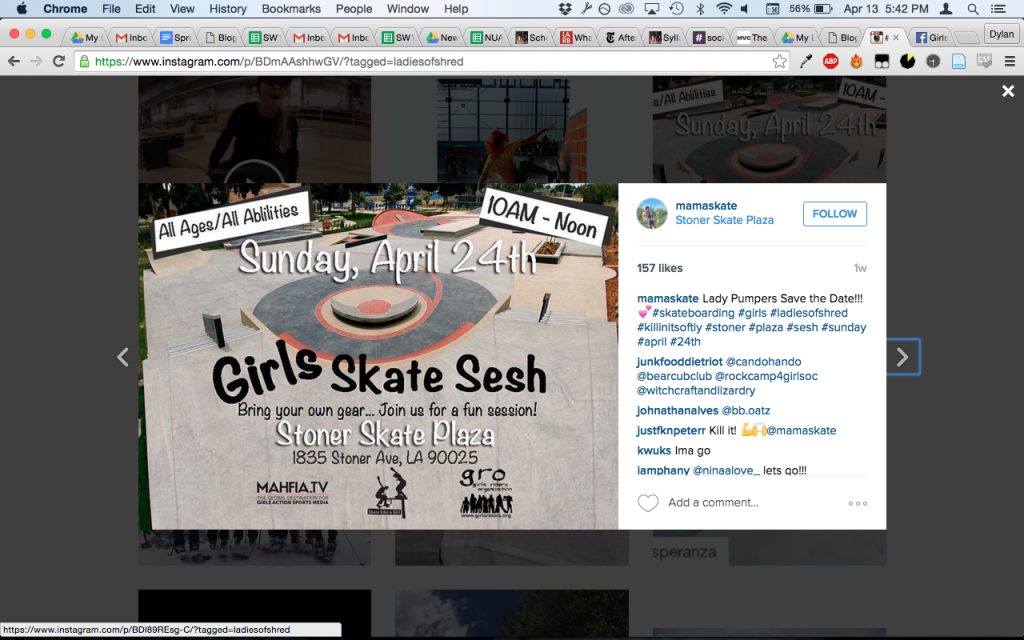 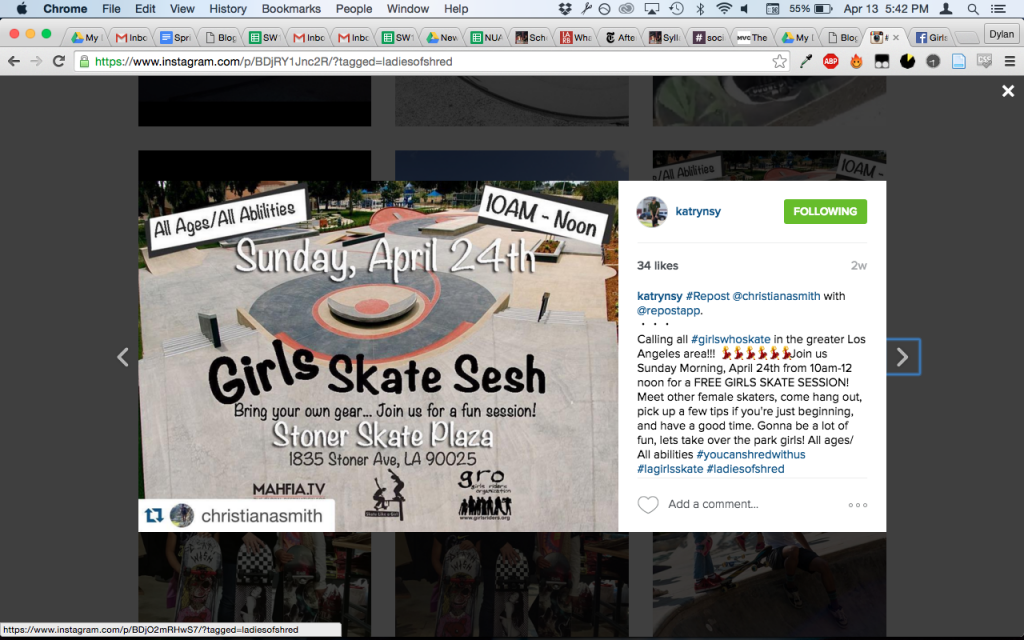 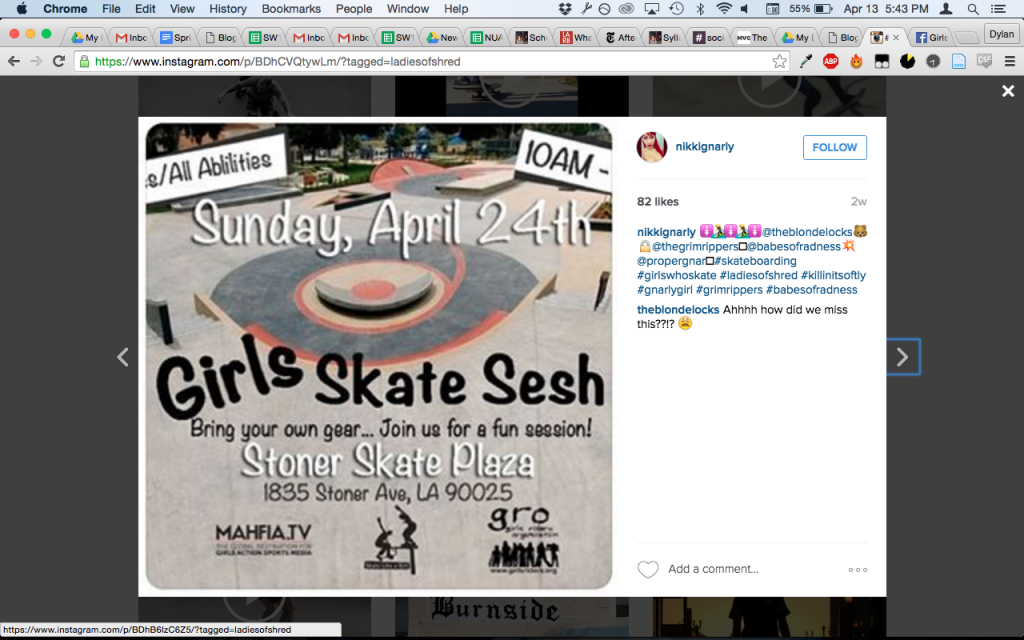 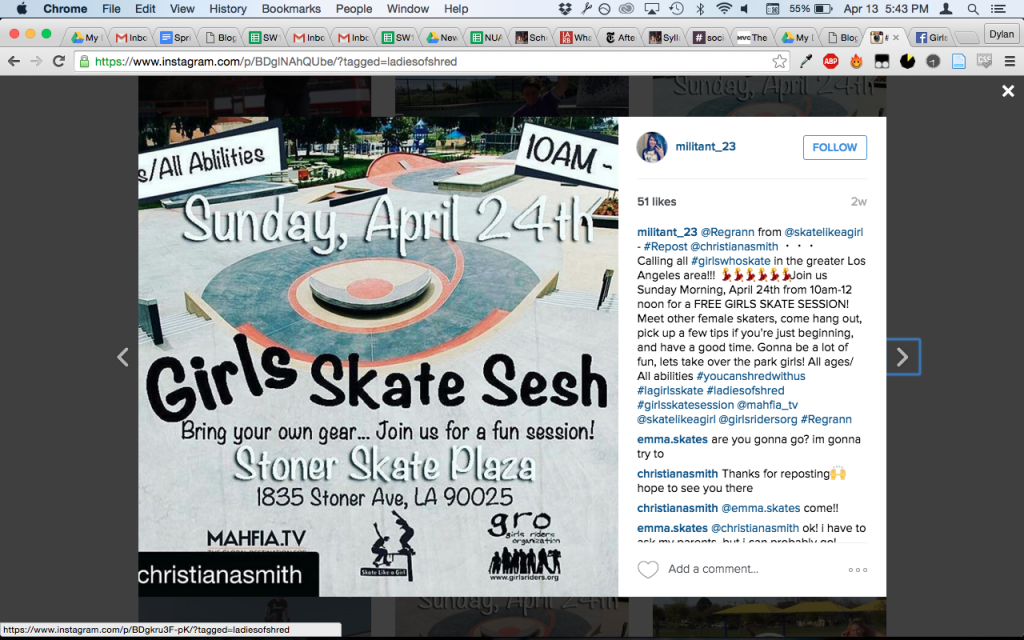 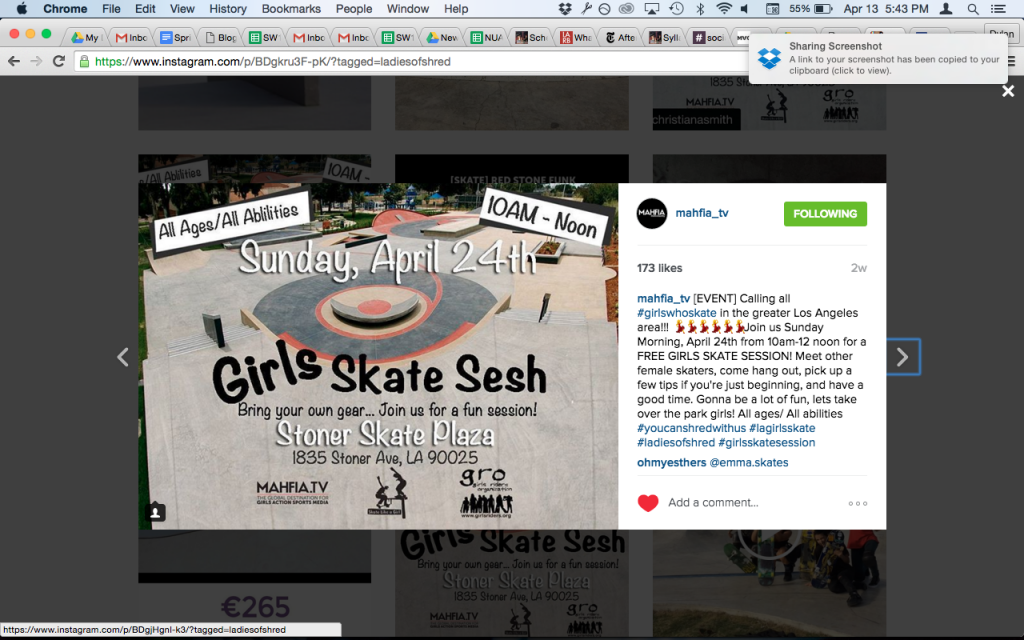 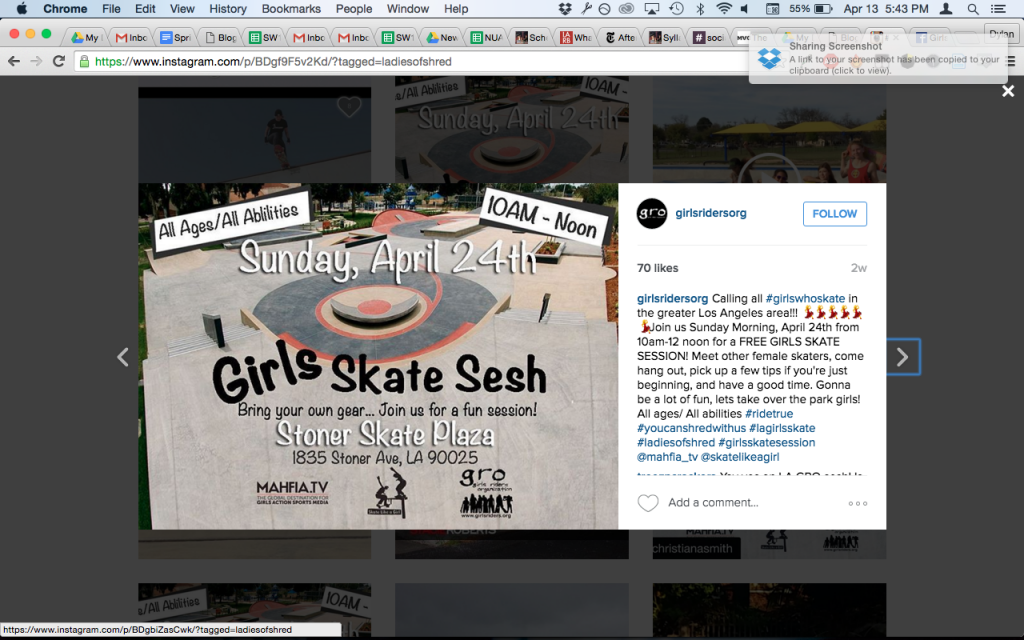 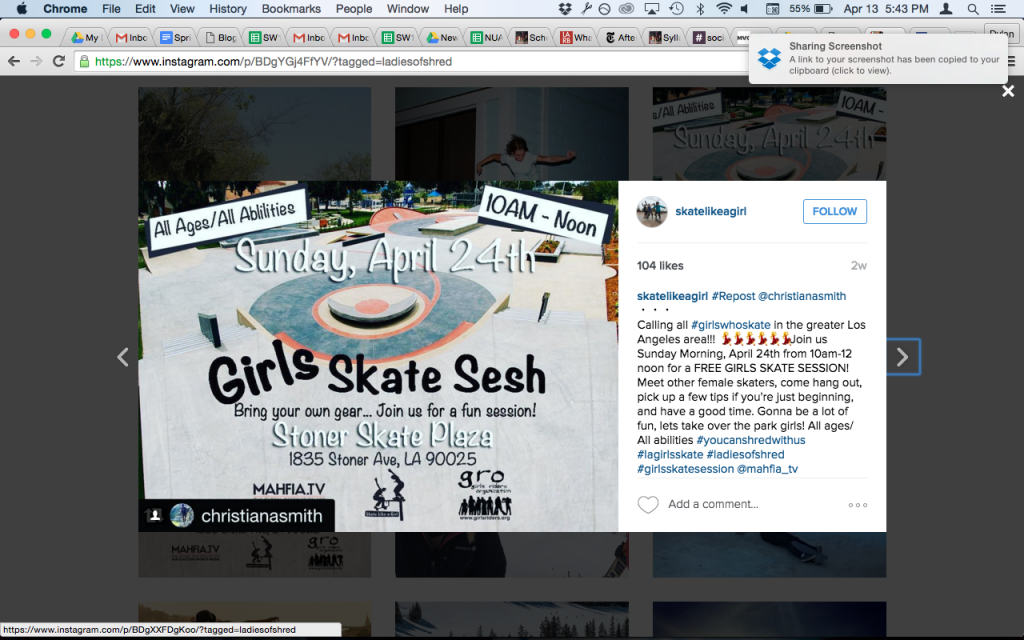 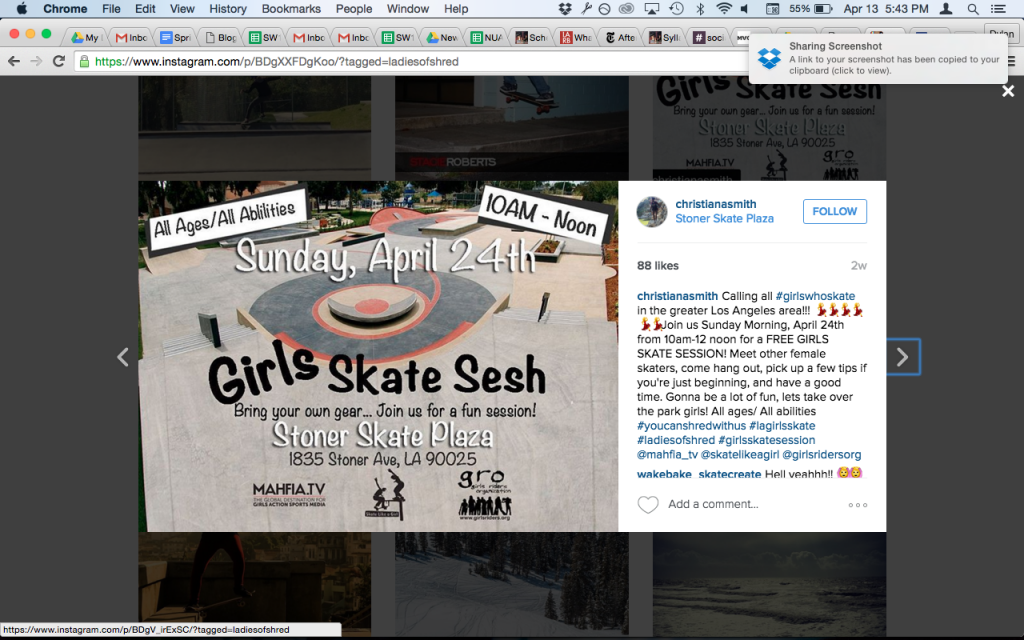 Of course, I don’t to give a totalizing or entirely uncritical view of women and girls’ skateboarding. Certainly, the community still has a long way to go towards being inclusive of all genders and abilities. While I spoke to or heard about a few trans and gender nonconforming skateboarders, these identities are far from promoted or celebrated within the framework of women’s skateboarding. However, women’s skateboarding is doing a lot of work to break out of a very narrow normative masculinity that has come to reproduce itself within men’s skateboard culture and communities, which has historically gone to create alienating and isolating environments for people other than cis men. The cultural model of women’s skateboarding centers inclusion and support. This becomes reflected in associated social media spheres.