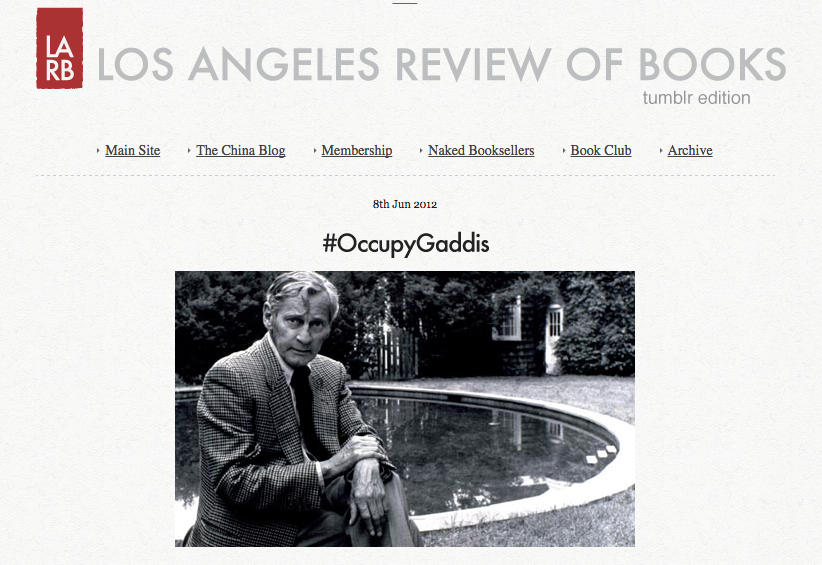 In the summer of 2012, I participated in a group reading of William Gaddis’ JR that was organized by Lee Konstantinou for the Los Angeles Review of Books.  Conversations of the book were held on Twitter, Tumblr, Facebook, Goodreads, online literary magazines, and on the comments section of linked blogs.

The reading of JR commemorated the year that passed since #OccupyWallStreet protesters took to the streets in 2011, so it was dubbed, appropriately so, #OccupyGaddis. 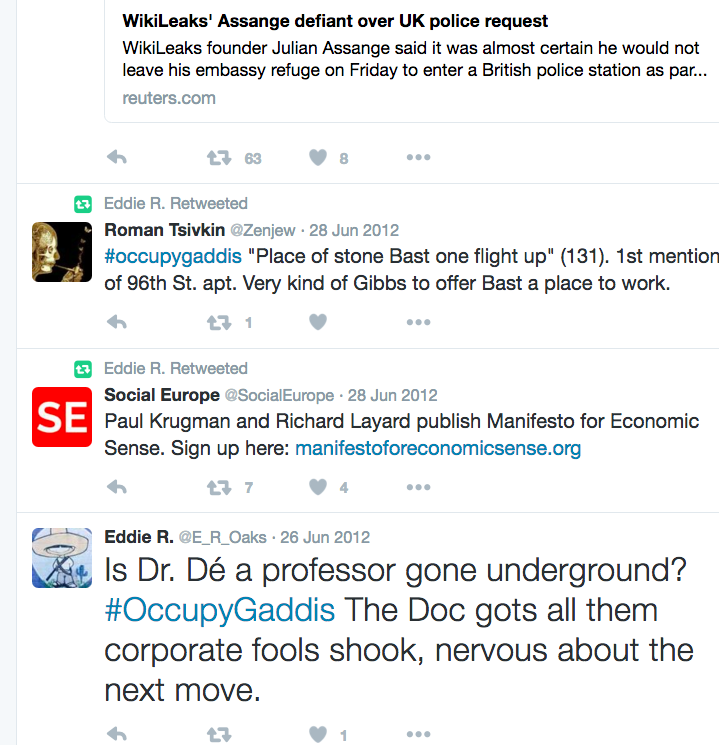 JR was published over 35 years ago, but its take on Wall Street, greed, the mechanization of education, the marginalization of art in society, and the increasing anti-intellectualism in America is more relevant than ever.

J R Vansant—a name that simultaneously conjures John D. Rockefeller, The Jungle protagonist Jurgis Rudkis, and a bowdlerization of New York’s intrepid Dutch origins—is a sixth-grader who takes advantage of the stock trade’s facelessness by building a makeshift corporate empire using payphones and mail-in catalogs. He enlists the help of Edward Bast, his school’s composer-in-residence who, just like Stanley, watches his own work get slowly downgraded from a symphony to a sonata to a suite and so on, all because of his better-paying obligations elsewhere. Meanwhile, JR’s school is busy installing a system of closed-circuit televisions, Bast’s family is embroiled in a delicate inheritance matter, and the school board’s funding is shown as increasingly reliant on corporate intervention. All these threads come together in different ways, although JR’s plot is byzantine to the point of madness; it’s purposefully cacophonous, meant to mirror the fact that America is “the noisiest country that ever existed,” as one character notes, quoting Oscar Wilde. 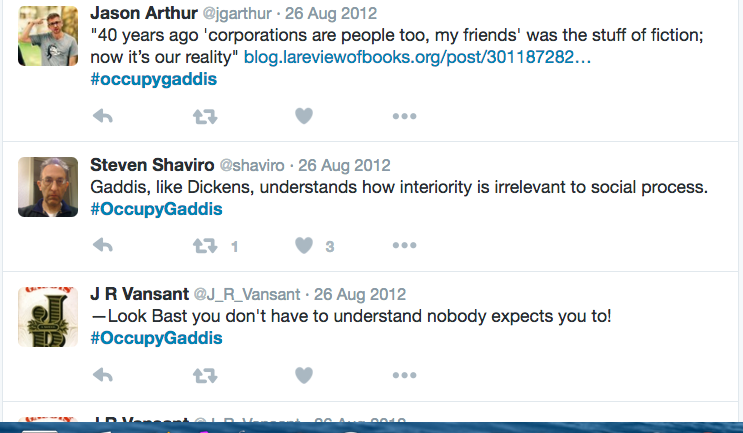 When #OccupyGaddis began, the lingering feeling of class antagonism from the Occupy raids was still fresh.  #OccupyLA was the last encampment to come down on the morning of December 1, 2011; and the draconian manner in which the LAPD cleared the protesters, still frightens me to this day.

The police barricaded the streets and shut down the media exactly at midnight on November 30.   Throughout the night till the early morning, police in white space suits and riot gear violently cleared City Hall of protesters. There was no news coverage, and live streaming was censored.  Protesters were left to the mercy of a police department riddled with abuse of authority problems.  Is it crazy the police used public transportation busses and Dodger stadium to move and process detainees?  I was stunned by this state of exception.

The raid unfolded in two days. I followed what was happening on Twitter and different television news channels.  People used the hashtag #OccupyLA to mobilize the masses.  On November 29, I saw in my Twitter feed that Miranda July was also giving a talk at the Los Angeles Central Pubic Library.  I tried going before going to the protest, but it was sold out.  As I left the library, I overheard a well-attired middle aged man say: “Café Pinot, after.”  Not tonight, bud. Class warfare on 1st and Spring St.  Nothing happened that night, though.  Police announced their ultimatum.  Helicopters swirled.  Activists assured themselves of their cause and commitment. This moment was truly heartwarming.  Volunteers stepped up to get arrested.  They were lawyers, grad students, green activists, and young Angelenos, who counseled one another on their rights in the event of the raid.

The following night when the police finally stormed, I was at home.   I wanted to see how television news covered it.  Around then, I had been reading Rich Media, Poor Democracy by Robert McChesney.   Of course, I flipped through channels dismayed.  The 1o:00 p.m. English language news passed with hardly any mention of it.  The 11:00 p.m. Spanish language news, likewise.  Later towards the night, all live streaming was cut from the internet.  I was baffled.  How can authorities pull the plug and get away with it?  What’s even worse, the police chief and mayor were applauded later that week for handling the situation non-violently.

As I think of how social media enabled so much solidarity with the Occupy movement, I also want to think about how digital platforms were subjected to state interests.  Months before the raid, KPFK Pacifica reported on media black outs in Tahrir Square, so it made sense to me to study the media during the Occupy LA raid.  But why was I surprised?

The Teletravel process must have been, for Gaddis, the natural end of the mechanization of everyday life: the reduction of the fullness of the person to data, transmissible over a cable.

At JR’s school, higher-level staff clumsily try to put together an educational television series to sell like MOOCs.  In LA, the police chief and mayor used the media to blot out repression.  The way power structures utilize communication systems to maintain the status quo is definitely something to think about when talking about media literacy, especially if social media is actively being employed in social movements.  What are the advantages and disadvantages?  As more protests are sure to soon arise, what with massive demonstrations surfacing in France,  Argentina, Mexico, Guatemala, Chicago, London, Reykjavic, new terms of media have to be defined for protest movements.